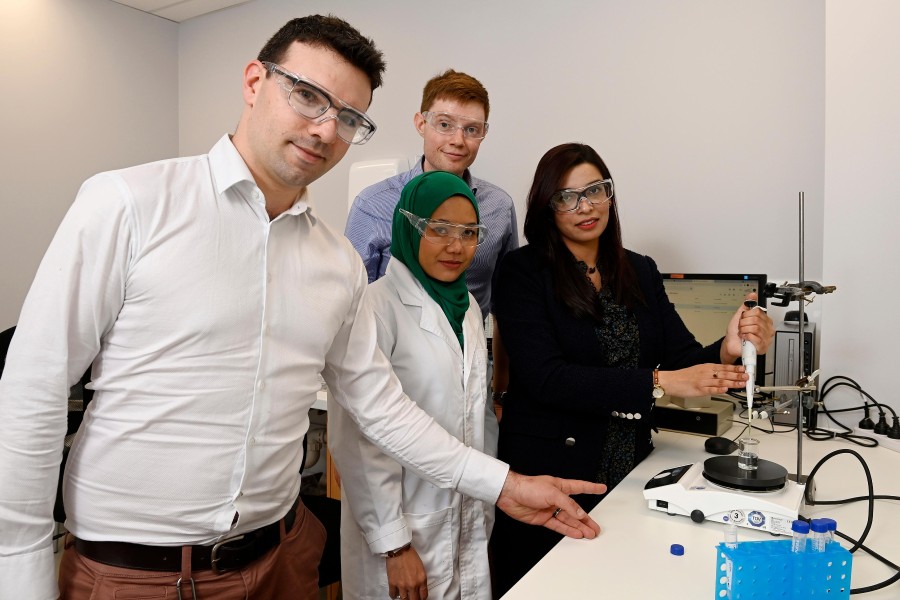 Committed to empowering obstetricians and midwives to deliver the greatest outcomes for their patients, WA company VitalTrace is developing a highly accurate biosensor to improve the safety of mothers and babies during childbirth.

The technology used to monitor babies and mothers during childbirth has remained largely unchanged since the 1960s, often producing ambiguous, inaccurate readings. When a team in the 2016 Spark Co-Lab program (now Perth Biodesign), witnessed two midwives arguing about their interpretations of a monitoring reading for a mother and her unborn child, they decided that there was an unmet need that new technology could address.

So, the spark for VitalTrace was lit.

Though co-founders Dr Arjun Kaushik and Dr Michael Challenor cannot recall now how many pitches, presentations and meetings that they had in the early days of the company before securing initial capital, their hard work and need for their product has been recognised time and time again from the sector.

“Manufacturing has a flow on effect throughout the ecosystem, and then through the economy,” she said. “Through a rigorous independent application process, our WA Voucher Scheme awarded five WA-based companies a total of $450,000 to accelerate innovation projects requiring advanced manufacturing capabilities, but with matched co-contributions of $600,000, the initiative injects more than $1 million into WA’s medical technology, biotechnology and pharmaceutical sector to drive job creation and economic growth.”

Dr Wilkinson noted that a 2020 roundtable on the topic of WA Medical Manufacturing was a major catalyst for the Scheme.

“Roundtables are a fantastic way to hear directly from the sector what their challenges are – what they truly need. But what good is it if we don’t walk away and take tangible action to address these?”

It is a mindset that appealed to sector leaders like Dr Kaushik and Dr Challenor, who attended the WA Medical Manufacturing roundtable.

The company is excited to use funding from the WA Voucher Scheme and BMTH program to build their in-house manufacturing capabilities, instead of relying on international partners and enabling them to retain value in the process.

“By causing us to focus on manufacturing transfer in parallel to product development, we’ve realised that this is where we should have been focusing all along.

“We now exclusively control how these sensors are made, and we’ve found that quality goes up. They become more accurate. They become more reproduceable. All the things that we were trying to achieve through science, we’re actually achieving through manufacturing now.

“We can manufacture the sensors ourselves - an Australian-first to our knowledge.”

“We want to invest in proper deep, basic science, because often that’s the only way to shift the envelope in an area that’s been unmet for a long time,” Dr Kaushik said. “You need to fundamentally change the paradigm, which usually means you have to look at new science.”

The VitalTrace team is keen to share enthusiasm for innovation with a growing MTP ecosystem in WA, which Dr Kaushik noted is benefitting WA start-ups both old and new.

“The journey we had to take is probably very different to the journey now for a Perth startup, and I would say that MTPConnect has contributed strongly to that, as have a slow accumulation of other startups and a real community. It’s happened in part thanks to an umbrella that you’ve created, which is fantastic.

“When we came out of Biodesign, it just felt a bit like a wasteland. We felt like we were the only startup in Perth almost!”

That is certainly not the case anymore, which was clear at the WA Innovator of the Year 2021 Awards where four of the six category awards were won by companies in the medtech, biotech and pharmaceutical (MTP) sector.

“I can go to the WA Innovator of the Year Awards, and feel like I am part of this community, and it’s a very different story to when we first came out of Spark,” Dr Kaushik said.

Dr Wilkinson said it was great to hear how the Hub’s initiatives had supported a start-up like VitalTrace. “It is a huge validation of the Hub’s mission. We’re trying to provide a long-term, ambitious program of activities with the aim of connecting, facilitating, supporting and spotlighting everything that our WA community has to offer,” Dr Wilkinson said.

“There is so much innovation happening in the MTP space in WA and Australia, and we look forward to continuing to support even more growth and opportunities for companies like VitalTrace.”

VitalTrace plans to begin human clinical trials in 2023, before a regulatory submission to the TGA in 2025.