Over 300 representatives of the Australian biotechnology sector formed the Australian delegation at the 2018 BIO International Convention, led by AusBiotech in partnership with MTPConnect and Austrade.

It was also a celebration of Australia’s long history of participation. Australia has consistently had one of the largest delegations to the Convention, but this year it was clear that Australia stood out among the other 70 nations in attendance. For one, it was the strong presence of the Australian Government, with the Federal Minister for Health Greg Hunt in attendance, that demonstrated to the international community Australia’s unwavering commitment to the translation of early science to new medicine.

This was strongly emphasised during Minister Greg Hunt’s fireside chat with Joe Damond, the Executive Vice President for International Affairs at BIO, on what the Government is doing to make sure Australia is ahead of the pack when it comes to supporting ongoing innovation, research translation, industry-collaboration and commercialisation. 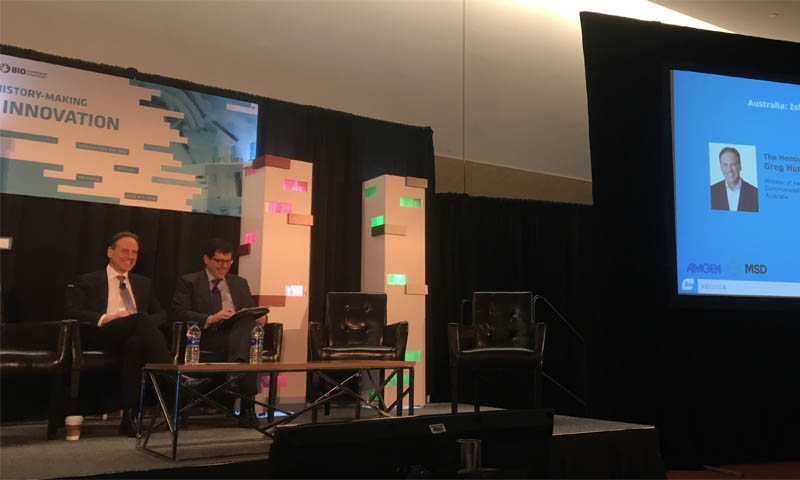 It was also a milestone year for Queensland – with the state recognised by BIO for leading high-level science and research missions to BIO since 1999. It was exciting to see both the Premier Annastacia Palaszczuk and Minister for Innovation Kate Jones in attendance, to showcase the state’s strengths in drug discovery and leading academic research. The Victorian delegation was also in full force led by the former Premier, Chair & Director of BioCurate, John Brumby.

It was certainly a successful convention for the Australian delegation, with many of the companies having up to 50 meetings with potential outcomes of new research and investment partnerships. In particular, these meetings provided CROs and clinical trials organisations with the opportunity to communicate the benefits of conducting clinical trials in Australia, due to the new initiatives and measures in the 2018 Budget, including the R&D tax credit and exclusion of clinical trials from the $4 million annual cap on RDTI cash refunds.

I was delighted to see the large gathering at our Australian wine and cheese-tasting event, bringing together more than 400 people to network, chat and even take a selfie with the Minister!

Austrade organised a post-BIO Mission to Philadelphia and Houston. Eighteen delegates joined the delegation. The Greater Philadelphia Region is ranked as the second-highest performing life sciences cluster — with 80% of US pharmaceutical companies located within a 2-hour drive. The delegation visited Jefferson University, GSK and participated in various meetings and networking events.

In Houston the delegation visited the Texas Medical Centre- the largest medical centre in the world with $25 billion in GDP and had meetings and site visits to Baylor College, The Houston Methodist Research Institute, TMCx Accelerator and the University of Texas Medical Branch.