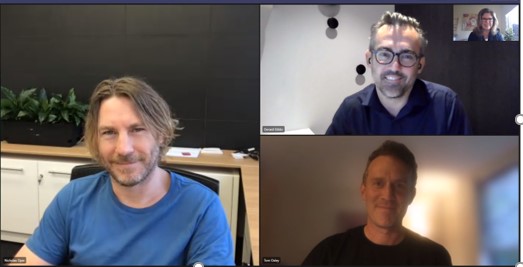 The device is called the Stentrode, it can be implanted into the motor cortex without the need for open brain surgery and helps patients with paralysis communicate by controlling digital devices with their thoughts.

Associate Professor Thomas Oxley – Synchron’s Chief Executive Officer joined the interview from the US. Tom is a Vascular and Interventional Neurologist at Mount Sinai Hospital in New York City, and co-head of the Vascular Bionics Laboratory at the University of Melbourne, Australia.

And Associate Professor Nicholas Opie - Synchron’s Chief Technology Officer and co-head of the Vascular Bionics Laboratory at the University of Melbourne, Australia joined us from Melbourne.

The interview covers their ten year journey working as a team to design, develop and test the device which has been trialed successfully in several Australian patients with very positive feedback.

It is the first device to be approved by the FDA for a US clinical trial with patients starting later this year at Mount Sinai Hospital in New York City.

The early feasibility study is required to prove the implant works safely ahead of being made available to patients which could be a possibility in a few years.

Listen to the episode to find out more about how this device is changing people's lives.