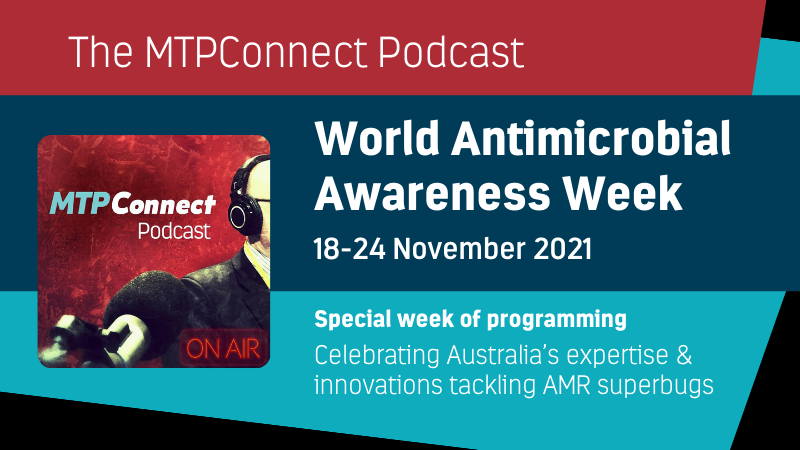 To mark World Antimicrobial Awareness Week 2021, the MTPConnect Podcast partnered with the team from AAMRNet – the Australian Antimicrobial Resistance Network – to produce a special week of programming shining a light on Australia’s expertise and innovations to fight superbugs.

Dubbed ‘the silent pandemic’, AMR has been identified as one of the greatest threats to human health today. To help raise awareness, the MTPConnect Podcast team delivered a week of AMR-focused episodes featuring biomedtech innovators from around Australia and covering issues from developing new treatments to finding faster methods of detection.

The first episode showcased the work of CO-ADD - the Community for Open Antimicrobial Drug Discovery  at The University of Queensland – which screens compounds from all over the world to search for the next new antibiotic. We spoke to CO-ADD co-founder, Associate Professor Dr Mark Blaskovich, who’s also Director of the Centre for Superbug Solutions at the Institute for Molecular Bioscience (IMB). He was joined by Dr Alysha Elliott, IMB Research Officer and part of the Cooper Group involved in translation of research for antibacterial drug discovery who leads the CO-ADD microbial team.

In the third episode, we caught up with Recce Pharmaceuticals, a company out of Western Australia that is pioneering the development and commercialisation of a new class of synthetic anti-infectives designed to overcome resistance. Its lead compound is the only synthetic polymer and sepsis drug candidate in development, as listed in the Pew Charitable Trusts Global New Antibiotics in Development Pipeline. It has also received ‘fast track’ designation under the US GAIN (Generating Antibiotic Incentives Now) Act. CEO James Graham joined the podcast from the US, fresh from attending the World Antimicrobial Resistance Congress in Washington DC.

And to close out the week of special programming, the podcast checked in with South Australia-based BiomeBank, Australia's first public stool bank and a microbial therapeutics company pioneering new treatments for debilitating bowel conditions. CEO Thomas Mitchell has recently returned to Adelaide after working with key microbiome biotech companies in US and UK, and in the final episode he discusses microbiome science – a hot spot in biotechnology right now.

While the challenges posed by drug resistance are significant, Australia is certainly playing its part and our researchers and start-ups are bringing innovative new treatments and products to market.

Take a listen and let us know what you think! You can subscribe to the MTPConnect Podcast here.