MTPConnect General Manager of International and Government, Dr Sandhya Tewari, visited India this month, coinciding with the Prime Minister's visit and Education Minister Simon Birmingham's Skills Delegation. Read her blog below to learn more about the Australian MoU with India on health, projects announced as part of the 10th anniversary of the Australia India Strategic Research fund, and a new India Economic Strategy to drive collaboration.

In March this year, my colleague Mel Thomson posted a selfie taken at Science Meets Parliament with Malcolm Turnbull on Twitter. You should have seen her face - a grin that stretches from ear to ear, if not beyond!

I decided that I had to top it, so I start scheming and plotting on how to get my OWN selfie with the PM, sporting an even bigger smile.

My opportunity came sooner than expected with the intelligence that the PM was planning a visit to India in April. Obviously, there is no better time to plan a trip to a priority market identified in your international engagement strategy than when the Prime Minister decides to visit that country. Access and connections to emerging Asian markets is one of the seven growth priority areas for MTPConnect, so I had been holding a couple of brainstorming sessions with KPMG, the Confederation of Indian Industry and Austrade on how we could create a ‘hive’ that would connect the right players to distill the honey of trade, investment, collaboration and profitability for both countries, as we felt that there was still a lot of untapped potential for Australia and India to work together in medical technologies, pharmaceuticals and health. In my previous role at the Victorian Government, we led various inbound and outbound delegations to India and built some significant connections. It was time to take this to the next level. And so it was, with the Prime Minister announcing major initiatives in health, skills, research and innovation. The Australia India Health MoU was exchanged in the presence of Prime Minister Turnbull and Prime Minister Modi on April 10, to help support Australia and India as natural partners in health – including on protecting health and wellness through the prevention of disease.

Tanya Shanti Spisbah, First Secretary at the Australian High Commission who was instrumental in the signing of the Health MoU, organised a health-focused table at the Australia India Partnership dinner that the PM hosted in Delhi. Under the broad framework of the agreement, she will be coordinating several health-related cooperation activities, initially focussing on digital health and data. It was wonderful to reunite with the legendary Kiran Mazumdar-Shaw, CEO and Managing Director of Biocon, India’s largest biotech company. Kiran and I go way back to when I headed the MTP vertical at Confederation of Indian Industry and Kiran was the Chairperson of the National Committee on Biotechnology. Kiran has plans for Australia and has invited me to visit her in Bangalore - I look forward to our future collaborations.

Now armed with my selfie with Kiran, next stop was to turn to the PM who had been chatting with her throughout the dinner.

Just as I got my phone out, the PM was invited to speak. He went on and launched the booklet released at the 10th anniversary of the Australia India Strategic Research Fund – Australia’s largest bilateral science fund - www.science.gov.au/ aisrf

My disappointment on not scoring a selfie is partially overcome by my delight to see The Florey Institute and the National Brain Research Centre in the list of successful projects, due to my personal engagement in bringing Professor Ashley Bush and Dr Pravat Mandal from these two organisations together on a Victorian Government led health mission to India in November 2015.

Nevertheless, I do not want to be complacent, and follow huddle of people who surround the PM for a photo as he gets ready to depart. While he is obliging, his minder who I shall, refer to as “No-Nonsense Nora” in her completely professional manner signals us to leave him alone. Believe me, you don’t mess with Nora. I retreat.

I am disappointed but not gutted as I know I have another chance. I know I have an invitation to the Australia and India Partnering dinner the PM is hosting the next day in Mumbai.

While I am in Delhi I use the opportunity to re-engage with my key contacts and friends in India from CII, NatHealth and the Department of Biotechnology to tell them about my new role at MTPConnect and identify potential collaborative initiatives.

In Mumbai I catch up with Aditya Bhadur, a former colleague from CII who is now the Director of Business Development at the Asian Heart Institute, and was delighted to hear that a commercial deal I had put forward with an Australian company developing a cardiac monitoring device is ready to move towards a contract.

After hours of struggling, I manage to drape by saree and head to dinner, where the night starts with speeches from Harinder Sindhu, the Australian High Commissioner to India, closely followed by the Prime Minister’s announcement of the commissioning of an India Economic Strategy, providing a plan for opportunities and partnerships between the two countries through to 2035.

The night is drawing to a close and despite trying to hover around the PM’s table, there are scant opportunities for a photo. I am barely able to enjoy the electrifying Bollywood performance.

The PM stands and hordes of people race up to him and No-Nonsense Nora efficiently manages to form a ring of deterrence. I am crestfallen. She raises her hand again. The PM looks at my face and signals me to pass my phone to him. My eyes light up as he raises his hand and shoots the PERFECT selfie! 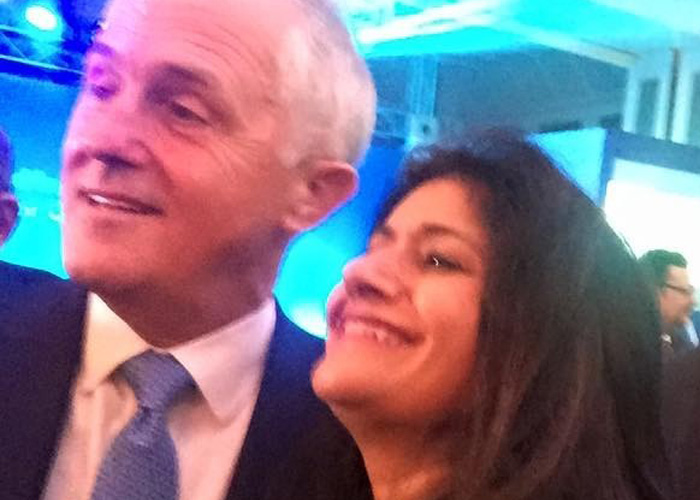 No marks for guessing what my twitter post said: “Move over Mel Thomson, my grin is wider than yours”

Pitiful, you say? I say all fun and games! When you work in such a close team, for such an important cause, you can jest with your colleagues and know that their grin on their face in reading this post will be wider than the one in the selfie.