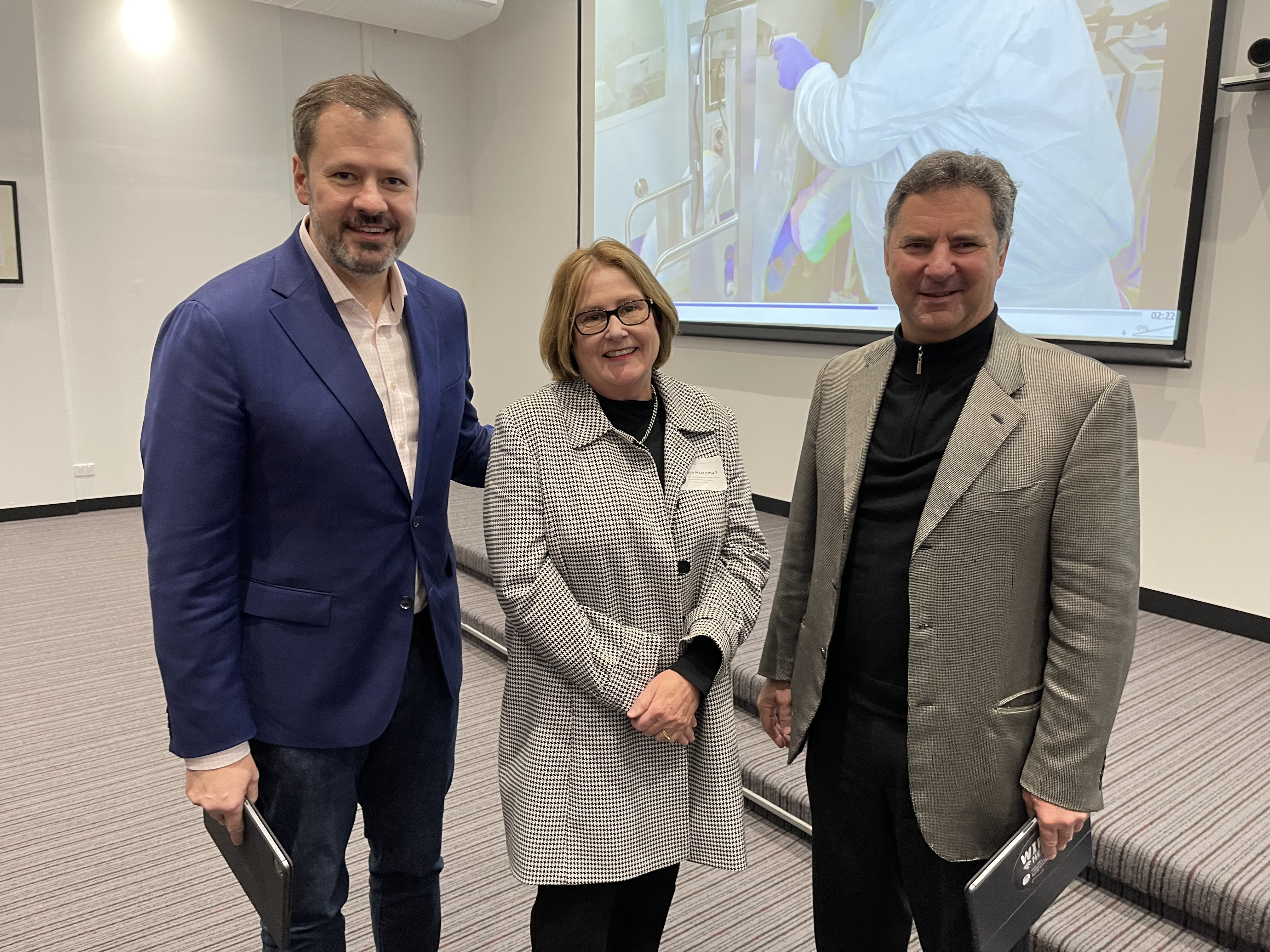 MTPConnect-backed National Biologics Manufacturing Facility Opened by Industry Minister
With funding support from MTPConnect, CSIRO’s new biomanufacturing facility in Melbourne has been opened by Industry and Science Minister, Hon. Ed Husic MP. The facility gives SMEs and researchers access to accredited manufacture of biologics to the standard required for in-human studies and will see a boost to Australia’s capability to manufacture vaccine and drug candidates. This project was supported with $1.1 million in funding from MTPConnect's Growth Centre Project Fund in 2017, starting with the development of a business plan and progressed to support for the design of the laboratory and purchasing and installation of specialist equipment. MTPConnect Chair Sue MacLeman and CEO Stuart Dignam attended the launch.

Australian Delegation to the MedTech Conference in Boston US Announced
We are leading a mission to the US to showcase Australia’s outstanding innovative medical technologies and unique capabilities and build valuable connections into international markets. The MedTech Conference 2022 convenes some 3,000 top industry leaders from companies designing, producing and distributing advanced medical technologies. Medtech innovators are invited to join the top-level visit program for the Australian delegation in conjunction with Austrade and GlobalVic, which will include site visits to multinational and industry organisations, insight keynotes and networking events. Registration closes on 23 September 2022.

Biomedical Translation Bridge (BTB) Program Celebrates Completion
As the Biomedical Translation Bridge (BTB) program moves to completion, a new report has captured a series of powerful case studies highlighting the journey of the 21 innovations supported by the program, striving to commercialise their medical products. The program held a BTB Finale event at Luna Park in Sydney bringing awardees, program partners and special guests together to celebrate the progress of the projects funded through the Medical Research Future Fund initiative. The winners of three awards were announced at the Finale dinner recognising The McMonty Medihood for the Most Significant Impact in the Australian Health Sector, Starpharma for Most Significant Commercial Outcome, and MycRx for the Most Significant Scientific Outcome. You can hear more about the BTB projects on the MTPConnect Podcast.

TTRA announces new partnership with Lowitja Institute Partnership and Indigenous Advisory Group The Targeted Translation Research Accelerator (TTRA) program will open Round 3 of its Research Projects funding in January 2023 to support diabetes and cardiovascular disease projects that address the unmet health and medical needs of Aboriginal and Torres Strait Islander peoples. In preparation, MTPConnect has commissioned Lowitja Institute, a community-controlled organisation and Australia’s National Institute for Aboriginal & Torres Strait Islander Health Research, to lead a prioritisation project to determine the Indigenous-specific priority areas for this focused round. An Indigenous Advisory Board has also been appointed to support the round.

TTRA Celebrates Launch of Research Centre ASHRA
Acting Senior Director Dr Mana Liao and Acting Director Dr Erin McAllum joined ASHRA to celebrate their official launch on the Gold Coast and Dr Liao made a short presentation about the TTRA program. ASHRA was established and funded through our TTRA Program, a collaborative approach to boost translation of Australian cardiovascular research.

REDI-Supported IntelliHQ & ANZICS National Healthcare Datathon Opens
The IntelliHQ & ANZICS National Healthcare Datathon is an immersive two-day workshop for solving unique healthcare challenges with big data analytics and AI-ML tools on real-world healthcare datasets. This will culminate in a National Pitch night on Thursday October 20th where teams will present their solutions to a panel of expert judges for a list of prizes. The event, supported by MTPConnect’s REDI initiative, will be headquartered in Brisbane with concurrent locations held nationally in Sydney, Melbourne, Adelaide and Perth.

Podcast Features SA Australian of the Year Professor Helen Marshall and AusHSI
Our first episode in August kicked off with SA Australian of the year Professor Helen Marshall who led the world’s largest meningococcal B vaccine study in South Australia, B Part of It. And to tie in with Cardiac Month, hosts Caroline Duell and Dr Mana Liao chatted with TTRA partner, the Australian Centre for Health Services Innovation (AusHSI)’s Operations Director Megan Campbell about their Cardiac Month, and the support and mentoring given to TTRA applicants and awardees and their research projects including the LISTEN project.

SA Insight Series Features Professor Helen Marshall
The Adelaide Intermediary Program hosted its third SA Insights Series in August with MTPConnect’s Jo Close in conversation with SA Australian of the Year Professor Helen Marshall sharing her insights into leading the world’s largest herd immunity study, the ingredients to coordinating an international partnership with a big pharma company, aligning diverse capabilities across the sector and why SA was identified as the best place in the world for this clinical research.

CTCM Information Session Spruiks Round Two Application Advice
We held a hybrid CTCM Round 2 Information Session – with a live event in Brisbane at QIMR Berghofer and a simultaneous webinar broadcast, providing advice for applicants ahead of the funding round opening on 9 September. The webinar is available to applicants as an on-demand video.

Chair and CEO Speak at Bridgetech Symposium
Our CEO Stuart Dignam opened the 3-day BridgeTech Symposium at Luna Park, Sydney, which included MTPConnect’s Biomedical Translation Bridge (BTB) Program Finale. MTPConnect is one of the founding supporters of the BridgeTech program, starting with our Growth Centre Project Fund, and again through a number of our MRFF programs. BridgeTech has been a key education partner in helping us deliver the BTB Program. MTPConnect Chair Sue MacLeman also made the Keynote presentation during the Symposium Dinner, sharing her experience on ‘Medtech Commercialisation in Australia’.

Case Study: CSIRO Opens Australia's New Biologics Manufacturing Facility for Clinical Trials
Our August case study highlighted the completion of CSIRO's National Vaccine and Therapeutics Lab in Melbourne, where Australian SMEs and academics will for the first time be able to manufacture their biologics in Australia to prepare for human clinical trials. This project was supported with $1.1 million in funding from MTPConnect's Growth Centre Project Fund in 2017, starting with the development of a business plan and progressed to support for the design of the laboratory and purchasing and installation of specialist equipment. The build of the facility was funded by CSIRO.