The Australian Antimicrobial Resistance Network (AAMRNet) is a multi-stakeholder expert group formed to address the impact of antimicrobial resistance (AMR) on human health. 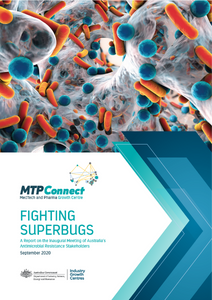 It was established in 2020 by the Industry Growth Centre, MTPConnect, in response to the paper Fighting Superbugs: A Report on the Inaugural Meeting of Australia’s Antimicrobial Resistance Stakeholders.

The Challenge of AMR

AMR occurs when microbes such as bacteria and fungi become resistant to the drugs which once killed them - evolving into untreatable ‘superbugs’.

Described as the ‘silent pandemic’, AMR now kills more people than malaria and HIV globally, and in Australia, over 1,600 deaths were attributed to AMR in 2019.

The Review on Antimicrobial Resistance estimates that around 10 million lives per year will be lost globally, and a cumulative US$100 trillion of economic output will be put at risk if no action is taken by 2050.

Concerns that AMR has risen during the COVID-19 pandemic are growing. Studies are showing an overuse of antibiotics in affected patients, even when not clinically indicated, and AMR is being increasingly identified as responsible for life-threatening complications amongst intensive care patients.

Researchers have also pointed to the profound clinical impact that AMR can have in cancer patients, and the grave need to identify challenges and provide solutions.

The World Health Organisation (WHO) has warned of the possible emergence of a ‘post-antibiotic era’ - where current antibiotics fail to be effective against even common infections and minor wounds.

AMR may also limit future capacity to perform medical procedures where antibiotics are the main line of defense, such as organ transplantation, cancer chemotherapy, diabetes management and major surgery.

A robust pipeline of new antimicrobials is central to combatting AMR. Yet, that pipeline is currently considered insufficient to tackle the rise and rapid spread of AMR.

A key reason for this is market failure. Currently, reimbursement of novel antimicrobials is linked to sales volumes. Novel antimicrobials are, in the main, used sparingly, kept as last line agents, and used only when all other treatments have failed or are inappropriate. This, along with a situation where novel antimicrobials are generally undervalued by reimbursement systems relative to the benefits they bring to society, results in an inadequate commercial return. There are recent examples of companies, such as Achaogen, that have bought these indispensable and life-saving drugs to market only to file for bankruptcy.

What We’re Working On

AAMRNet is uniquely placed to address the imminent crisis of AMR.

It works with key national and international stakeholders across the biotechnology and pharmaceutical industry, the health and medical sector, clinicians, and government, to identify and tackle the challenges of AMR.

Leveraging its role as a multi-sectoral network, AAMRNet is driving some of the priorities in Australia’s National Antimicrobial Resistance Strategy – 2020 & Beyond.

In particular, AAMRNet is working to:

The threat of AMR calls for an immediate global health response.

The WHO, in its Global Action Plan on AMR, urged countries to have in place their own national action plans, aligned with its own, to strategically counter AMR.

Addressing the current market failure for novel antimicrobials requires a critical balance of both ‘push’ incentives, that lower the cost of R&D, and ‘pull’ incentives, that provide a predictable return on investment and reward successful development.

Recognising and acknowledging the importance of ‘pull’ incentives, in 2021 the G7 Finance Ministers released a statement on ‘Actions to Support Antibiotic Development’, with a view to strengthen G7 preparedness against AMR.

The statement commits all G7 members “to expedite their implementation of existing strategies… and to take additional specific and appropriate steps to address the antibiotic market failure and create the right economic conditions to preserve essential existing antibiotics and ensure their access, strengthen AMR antibiotic R&D, and bring new drugs to market where they meet identified public health needs”.

In Australia, the Australian Government House of Representatives Standing Committee on Health, Aged Care and Sport’s recent report, The New Frontier - Delivering better health for all Australians outlined several initiatives, including the need for effective funding and the establishment of a pilot scheme for new antimicrobials. 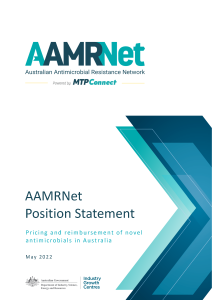 Through the efforts of its working group on pricing and funding, AAMRNet has developed the 'AAMRNet Position Statement: Pricing and reimbursement of novel antimicrobials in Australia', highlighting innovative strategies for bringing new antibiotic treatments to market.

The statement, released in May 2022, is aimed at stimulating discussion and spurring action. It canvases ways to stimulate research and development for new treatments, novel reimbursement approaches to support and ensure a continuing pipeline of novel therapies and the merits of a pilot Australian fund to provide access to new antimicrobials and support their appropriate use.

AMR is an urgent issue that needs to be heard and addressed and AAMRNet is an integral part of the collaborative global effort.

On the final day of World Antimicrobial Awareness Week 2021 (WAAW) the AMRelay 2021 took place - a 24-hour virtual and global event organised by the AMR Insights Ambassador Network - offering a series of consecutive contributions from stakeholders in the AMR sector. AAMRNet Co-Chair Andrew Bowskill presented an update on Australia's first industry-led, multi-stakeholder Antimicrobial Resistance Network, established and operated by MTPConnect to support actions to combat AMR in Australia. Watch the video below: