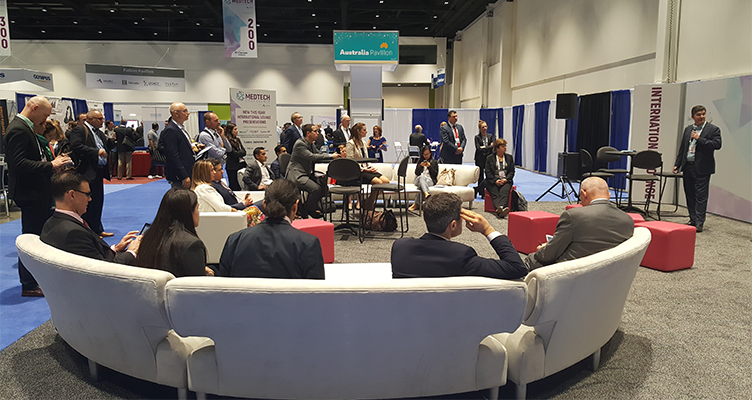 Pictured: The MTPConnect delegation listening to the "Why Australia" session at the 2017 MedTech Conference.

MTPConnect took 29 Australians to the 2017 MedTech Conference in San Jose, that brought together thousands of medical technology professionals from the US and across the globe. The conference provided an opportunity to showcase Australia's capabilities, connect on business development and innovative technologies, and network with policymakers, business executives and industry leaders, resulting in numerous leads.

The MTPConnect Australian Pavilion provided delegates with a space to easily engage with international audiences at the conference through meetings, presentations, with a majority saying that the delegation drove their decision to attend, particularly for SMEs. Delegates said that a booklet with profiles on each delegate and a sector infographic was instrumental in catching the attention of and facilitating productive engagement with co-delegates and attendees, and provided a united front that presented Australia's strong standing internationally.

Judy Halliday from TechInSA had great things to say about the delegation.

“The MTPConnect delegation was well planned, opened doors to key contacts and potential partners, and provided a visible and vibrant ‘shopfront’ for Australia," Ms Halliday commented.

Andrew Brockway of IQVIA (formerly QuintilesIMS) explained that the delegation helped to increase the profile of Australia's presence in medtech.

“MTPConnect helped to facilitate meeting with new potential customers, as well as introduction to other Australian colleagues in the medtech space," Mr Brockway said.

"Being part of an Australian delegation certainly helped to provide additional credibility and helped to increase the profile of members of the delegation.”

As well as attending the full program of events as part of the conference, the Australian delegation also took part in a tailored agenda of exclusive events including a tour of the Boston Scientific CRM manufacturing site, and presentations from the Medical Device Innovation Consortia, Hogan Lovells attorneys, and Medical Alley on topics to learn from and assist in entering the US market. MTPConnect also organised a breakfast hosted by Edward Black of Reimbursement Strategies LLC on reimbursement and market entry in the US, EU, as well as commercialisation and product development resources, which was extremely well received by delegates.

The delegates also noted that the ability to connect with other Australians during a "meet and greet" session prior to the conference was one of the highlights, and has resulted in a number partnering for various grant and project opportunities. With 100% of the respondents saying that the MTPConnect-led delegation was a beneficial investment, and 80% reporting that the delegation has resulted in leads, partnerships, pilot-studies and potential investments with the likes of Harvard Innovation Lab and J&J Lab, it is clear that banding together to provide a united Australian front at The MedTech Conference is a highly productive and worthwhile exercise not only for the companies and organisations in attendance, but for promotion and growth of the wider Australian sector in establishing our world-leading position.

Joelle Hawa of Swinburne University of Technology said she found the delegation beneficial and served as a great introduction.

"MTPConnect showed good leadership at the MedTech Conference by supporting and guiding the Australian representatives, as well as introducing the delegation to various aspects of US market," Ms Hawa said.