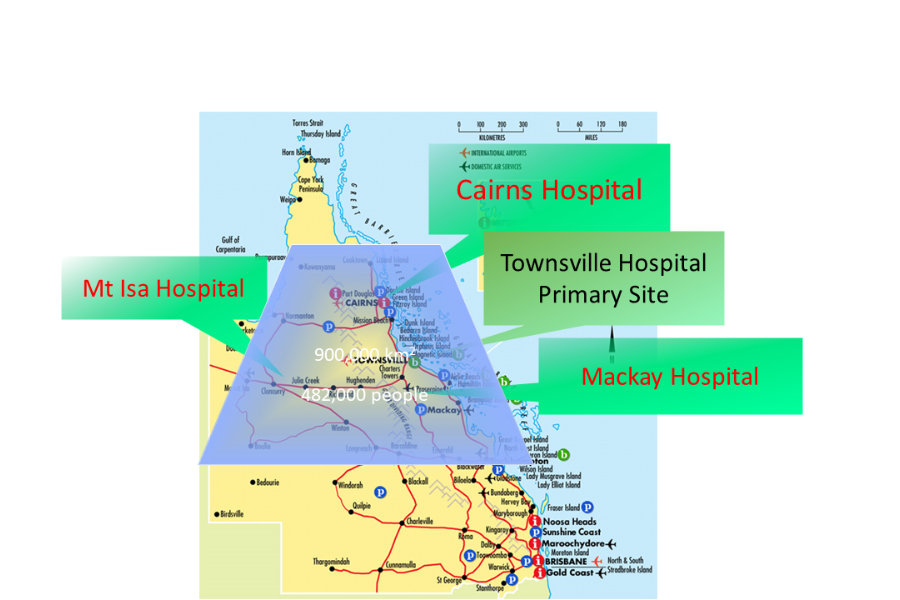 Pictured: the impact of the COSA Australian Tele-Trial implementation in Queensland in 2017-2018.

The Clinical Oncology Society of Australia (COSA) are bringing access to clinical trials for patients living in rural areas, with support from a funding consortium of industry, Medicines Australia, research institutes and consumer groups. As part of the MTPConnect Project Fund Program, COSA identified key rural areas across Australia to improve clinical trial capabilities and enrolment, commencing the ground-breaking project in 2017.

Building on COSA's Tele-Trials Pilot Project (a case study we published in May 2018), tele-trials have now expanded from two rural NSW sites, at Orange Hospital and Dubbo Hospital, with four patients; to seventy-five patients participating in tele-trials nationally in Queensland, NSW, ACT, Victoria and South Australia.

Professor Sabe Sabesan, Director of Medical Oncology at Townsville Hospital and co-chair of the COSA Tele-Trials Project said the collaboration with Queensland Health has been vital in rolling the Tele-Trial Model out across Queensland.

“There has been significant progress in treating cancers and it is important all our communities across the country are able to access the latest developments,” Professor Sabesan explained.

“Queensland Health have led the necessary regulatory and governance reforms to establish the Tele-Trial Model in Queensland and it is vital that other States follow their lead and adopt uniform processes nationally.”

The biggest challenge facing implementation of the MonarchE tele-trial was the development of streamlined processes for the review, authorisation and conduct of the tele-trials model. Queensland Health in collaboration with COSA drafted new standard operating procedures to incorporate tele-trials into routine practice and Queensland Health facilitated state-wide implementation of the model.

The greatest impact from this project has been delivering greater patient access to important clinical trials. Airlie Beach grandmother Robyn Creighton, who was diagnosed with breast cancer in September 2017, was offered participation in the Monarch E tele-trial.

“When I was told I could have the trial treatment nearby at Mackay I agreed to give it a go. Without access to the trial, I would have had a seven-hour round trip from Airlie Beach to Townsville to participate,” Ms Creighton said.

“It didn’t seem fair that I couldn’t take part just because of where I live but I am glad that is starting to change.”

It is expected the Tele-Trial initiative will result in improved quality of care for cancer patients and help reduce the disparity in outcomes for cancer patients living in regional and remote areas of Australia by enhancing rural service capabilities and reducing variation in practice.

You can also hear more about this project from Professor Sabe Sabesan and COSA CEO Marie Malica, on the MTPConnect Podcast Series now.