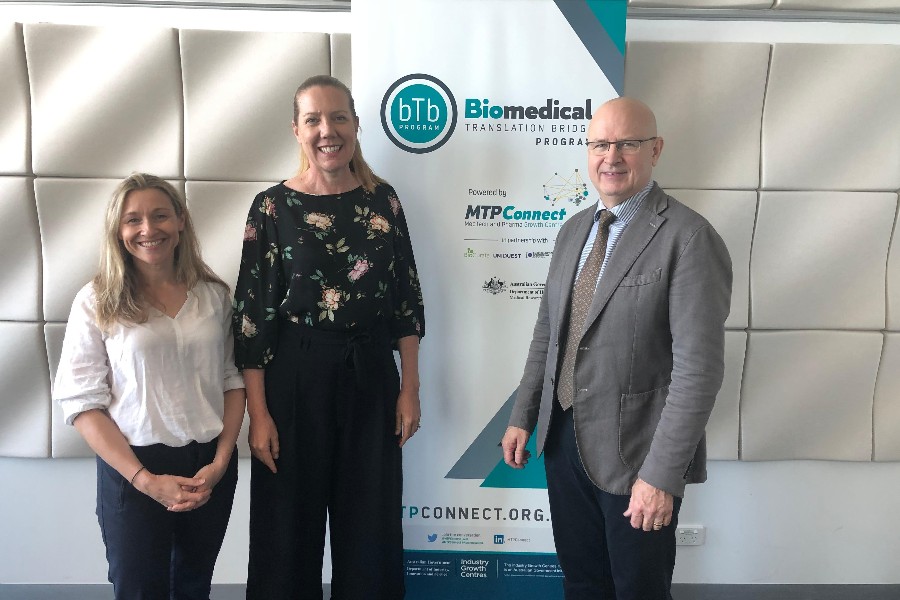 Noisy Guts is an emerging early-stage WA medtech start-up, that has been awarded $1 million matched funding in Round 1 of MTPConnect's Biomedical Translation Bridge Program.

In partnership with Merck, Nature Research identified Noisy Guts as "one to watch" in the inaugural 2020 Spinoff Prize that showcased university spinoff companies from around the world.

With up to one in five Australians to suffer from Irritable Bowel Syndrome (IBS) at some point in their life, and half the population complaining of some digestive problem in any 12-month period[i], Aussie stomachs are clearly having a hard time.

These problems can be exacerbated because many patients struggle to explain their experience of gut discomfort. Gastrointestinal disorders are estimated to cost the Australian Government over $6.8 billion each year[ii], making them one of the most expensive disease groups for admitted patients in public hospitals.

So how do we treat gut problems without resorting to invasive measures that place more strain on the healthcare system?

For Nobel Laureate Professor Barry Marshall, the answer lay in termite sensing technology. During an episode of the MTPConnect podcast, alongside Noisy Guts CEO & Co-founder Dr Josephine Muir, Marshall explained where the inspiration for Noisy Guts came from.

“I was visiting someone at another university, and he showed me these little microphones to put on your house to listen for termites, so it was a little tiny Internet of Things type gadget, and then using artificial intelligence to listen to the termite scratching noises,” he said.

“About half of the patients that gastroenterologists see are people who you can’t find anything wrong with them, they get tummy pains from time to time, and it’s also quite common in children.

“I thought, well why not put microphones on peoples’ abdomens and analyse it with a supercomputer?”

The Noisy Guts team found that there was a correlation between the gut noise patterns recorded by microphones and particular gastrointestinal disorders. These microphones were integrated into the Noisy Guts ‘acoustic belt’, a wearable sensing device that is user friendly for both patients and clinicians and was termed a ‘Fitbit for the gut’ by Co-founder Dr Mary Webberley[iii].

The Noisy Guts program, which recently spun out of the University of Western Australia, brings together clinicians, data scientists and engineers to create an efficient experience for recording and diagnosis, and is a prime example of how digitised solutions can be translated to the medtech industry from other, sometimes surprising, areas of research.

The company has already won several significant awards on the Australian start-up stage including two WAITTA Incite Awards in the categories ‘Research & Innovation Project of the Year’ and ‘Most Innovative Enabler in Healthcare’.

They also won a national iAward in the Community Service category and received a merit award in the R&D award category, as well as winning a coveted national ACS Digital Disruptor award in digital health transformation.

“Success at the 2018 WA Innovator of the Year (Emerging Innovation) and later at the 2019 WAITTA awards were critical in showcasing our technology to industry and investors in WA and beyond,” said Dr Muir.

“The exposure and networking opportunities were invaluable in building momentum for our seed round. WAITTA has been an award platform that simply keeps on giving.”

Whilst initially focussed on IBS, Noisy Guts is excited about expanding the capabilities of its acoustic belt. The company is currently undertaking a clinical study involving 350+ patients with Crohn’s, Colitis and Coeliac disease.

“Together with the $1 million matching funding from the BTB grant, we’re looking forward to having a regulatory compliant device registered with the TGA by 2021.”

MTPConnect's Director of Stakeholder Engagement WA Dr Kate Brooks, who leads the MTPConnect WA Life Sciences Innovation Hub, arranged for Noisy Guts to be featured on the MTPConnect Podcast. With a global audience per episode, this was a great way for the WA Hub to promote the story of Noisy Guts.

“It’s been wonderful to watch the Noisy Guts team go from strength to strength over the past few years, and we look forward to continuing to support them in scaling and promoting their business,” said Dr Brooks.

“The inspiration for Noisy Guts – termites – might seem a bizarre connection, but what it says to us is that WA’s medtech ecosystem doesn’t and shouldn’t exist in a bubble.

“We should be looking to other industries, other areas of research, to think of creative ways that we can solve health problems.

“Here in Perth, there is tremendous opportunity to look to other sectors such as space, astronomy and the resources sectors for inspiration and technology solutions.”

For more information, visit Noisy Guts and listen to the MTPConnect Podcast in the episode, ‘Introducing Noisy Guts – an Australian Nobel Laureate’s take on MedTech Commercialisation’.