Pictured above: Alfredo and I at the Australian Pavillion at the MedTech Conference.

MTPConnect’s Director of Major Projects Elizabeth Stares shares her insight on the fantastic two weeks in September, where she attended major conferences and events in Australia and abroad.

Wow – what a fantastic two weeks.

Early September saw the second AFR Innovation Summit – an inspiring event where I listened to various speakers, from parliamentarians, chief scientists, MTPConnect’s CEO Sue MacLeman, and CEO’s of innovative companies. The standout for me was the presentation from the co-founder of Thankyou, Daniel Flynn – describing the company’s tenacity in getting their product to market, and their unique method of raising funds for ‘chapter 2’. I left feeling upbeat about the role each of us has in bringing new innovations to the market.

In the final week of September I travelled to San Jose, California for The Medtech Conference accompanied by a strong delegation of 29 Australian companies. Australia was one of the top three delegations for this conference, with many of the delegates having a full program of partnering meetings, as well as networking and getting to know their Australian colleagues with more meetings and collaborations arranged once back in Australia.

It was interesting to talk to the delegation about their product development journeys and the collaborations that they were engaging in to get to market. Its an exciting time in Australia as we have some great products due to launch soon!

Ian Burkhart who spoke at the plenary breakfast, shared his experience when at the age of 19 he damaged his spine and was unable to move his body below his shoulders. Ian spoke of researching every clinical trial he could find and discovered a site near his home was recruiting for a clinical trial so he volunteered. The trial involved treatment to bypass the spine and transmit signals externally from the brain to a limb. The clinical trial was a success and Ian can now move his arm and hand, can drive, and is more independent. He has continued to engage with the clinical trial team and together they are refining the programming.

Isn’t that just a fantastic use of technology?

Later in the week I travelled to CCRM Canada (Centre for Commercialisation of Regenerative Medicine) International Hub meeting in Toronto. CCRM Australia has been supported through the 2016 round of the MTPConnect Project Fund Program. The fruitful meeting discussed the ways the hubs could work together, the specialised capabilities and knowledge of each location, and enhance the technology review process. This was followed by the official opening of the CCRM facility in Toronto, a tour of the CCRM facilities and visits to MaRS and JLabs.

My highlight of these events was meeting Dr James Till, who together with Dr Ernest McCulloch, are known as ‘The Fathers of Stem Cell Science’; for their work in the 1960’s investigating the structure of a cell that had led to many awards.This is the early research that has since led to the development of the whole stem cell industry that CCRM is working in commercialising. A sculpture was unveiled in their honour outside the MaRS West Tower after the official opening of CCRM. 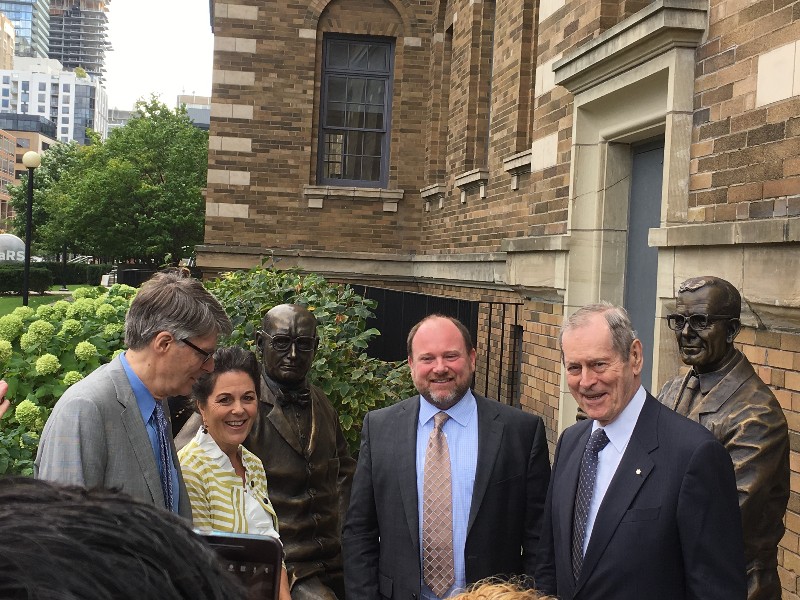 I met many stem cell researchers and scientist after the opening event, all with fascinating technologies, many of these discoveries are making their way off the benchtop and into patients.This is an exciting time for stem cell technology and the commercialisation activities of CCRM Canada and the international hubs.

I am enjoying watching the Australian research sector take the world by storm. We are seeing international companies continue to look to and invest in Australian companies because of all the great work we are doing in the clinical trials space, research innovation and commercialisation. International trips such as this are vital to keep Australian innovations moving forward and enhancing global recognition.

I am excited about what the rest of 2017 will bring!